The smart money is on ad-blocking users. Here’s how to get them back...

The smart money is on ad-blocking users. Here’s how to get them back...

Ad blocking is an inescapable reality in 2018. Not only is the amount of ad-blocking users increasing, but some of the biggest online players are finally bowing to user pressure, essentially validating the use of ad blockers.

On the surface this is bad news for advertisers. It’s only natural to meet the future with a mixture of fear and trepidation and cling to old business models that worked in the past. For the forward thinking, however, ad-blocking users represent a golden opportunity to reach a selective, educated and high-spending audience.

In this piece we will look at why you should embrace the reality of an ad-blocking audience, why they are so valuable and the ways you can reach them.

I think it’s obvious that If you work in the publishing business or in marketing, you have a few choices. You can ignore ad-blocking users completely, and write them off as a loss. Or you can attempt to annoy them into submission with paywalls, circumvention or pop-ups that ask them to turn off their ad blocker. With a couple of exceptions, these methods don’t seem to be working so well. Ad-blocking users are just as likely to ignore your site and your marketing efforts if you choose to ignore their right to see the web as they choose.

But why not attempt something different? Matching your target audience profiles with ad-blocking users and finding ways to reach this highly valuable audience allows you to leverage a consumer group that is underappreciated and very active online. Reaching out to ad-blocking users and advertising in a way that they find acceptable allows you to gain a competitive edge.

Studies show that there is a positive correlation between academic level, online spend, ad impact and use of ad blockers. This is not a myth – and you should ignore these users at your own risk.

Ad-blocking users are not “scorched-earth” ad blockers for the most part. The overwhelming majority of people who use ad blockers are actually open to seeing some ads, as long as they are not intrusive or too numerous. It’s a question of respect – the less an advert disrupts a user’s online experience, the more likely they are to be receptive to advertising. 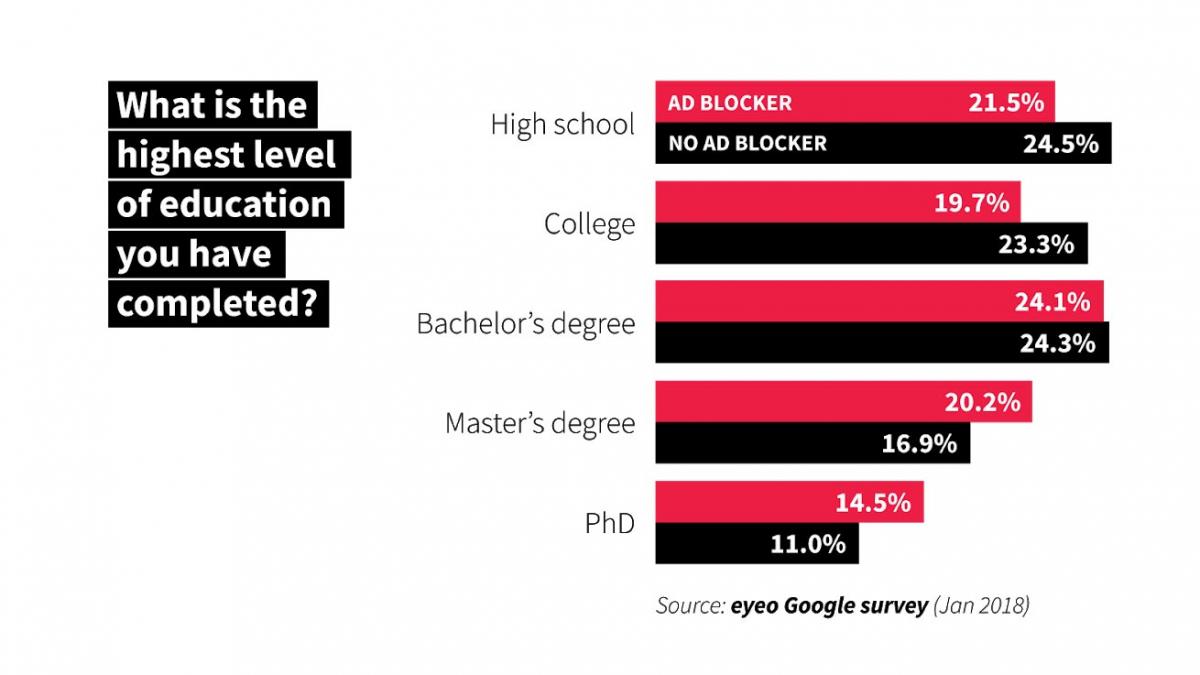 If you market products or services that are aimed at educated people, it would be irresponsible to ignore ad-blocking traffic. You also lose “selective ad blockers” – a valuable group that are more inclined to be influenced by nonintrusive ads. More highly-educated ad-blocking users are more likely to be selective. 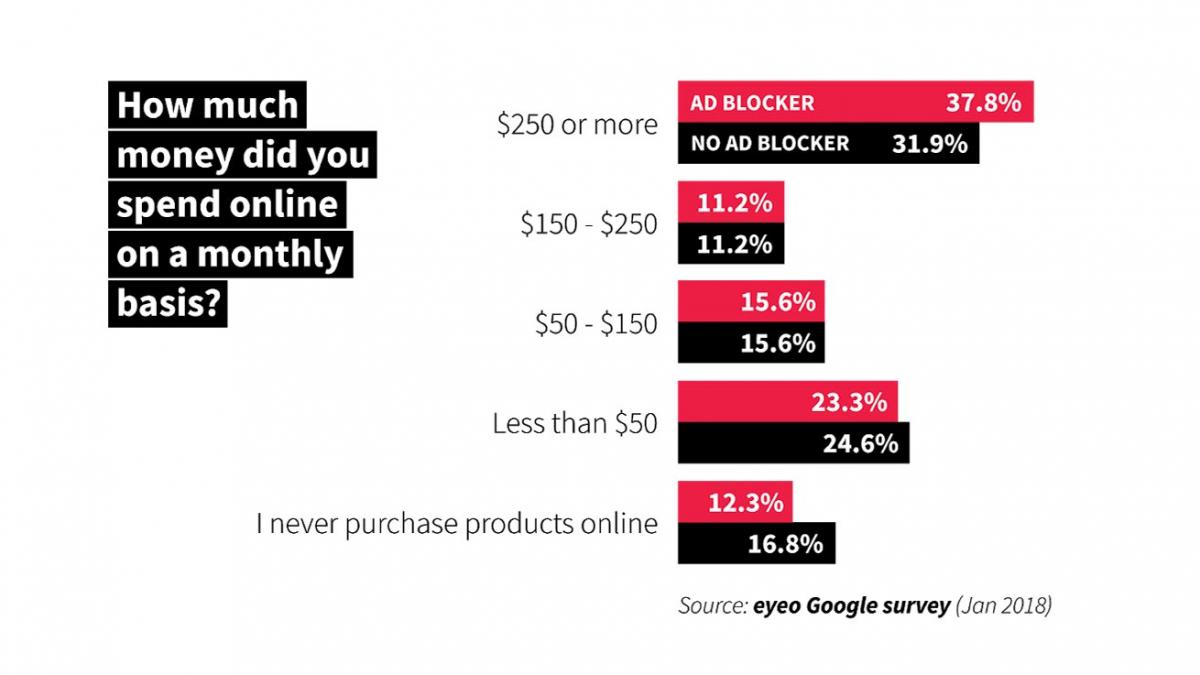 If losing a large swathe of your potential audience isn’t enough of a motivating factor for you to stop ignoring ad-blocking users, let’s look at some more evidence. In the figure above, we can see instantly that high-spending online audiences ($250 dollars or more a month online) are more likely to be ad-blocking users. 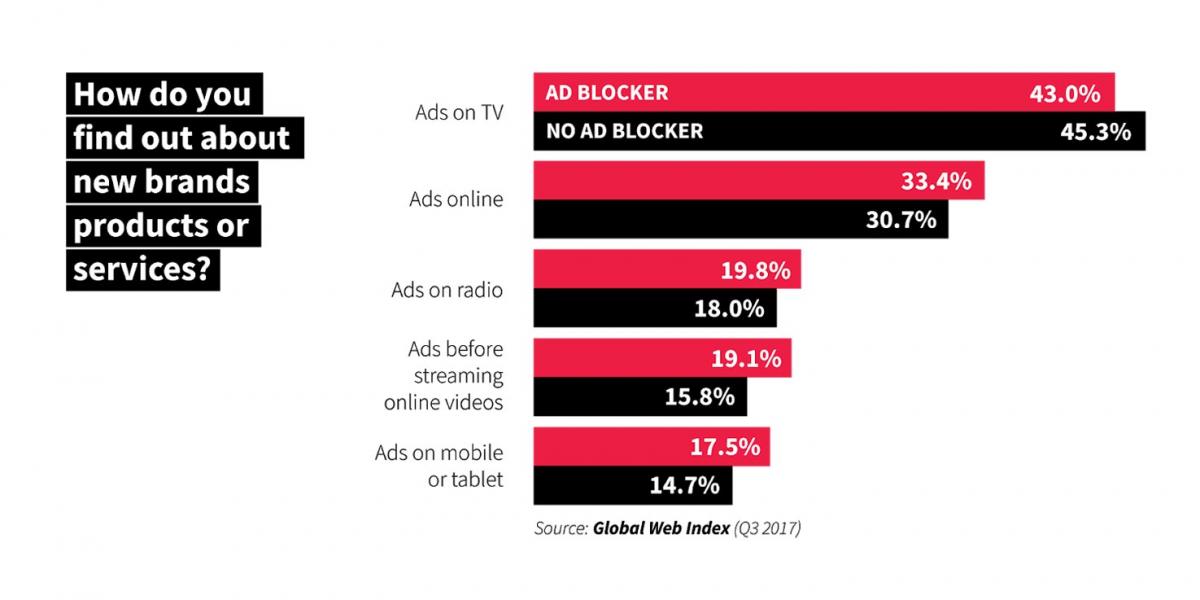 Interestingly, this Global Web Index study shows that ad-blocking users are actually more likely to discover new brands, products and services online than non-ad-blocking users. By seeing fewer intrusive and annoying ads, they are more receptive to the ads they do see. 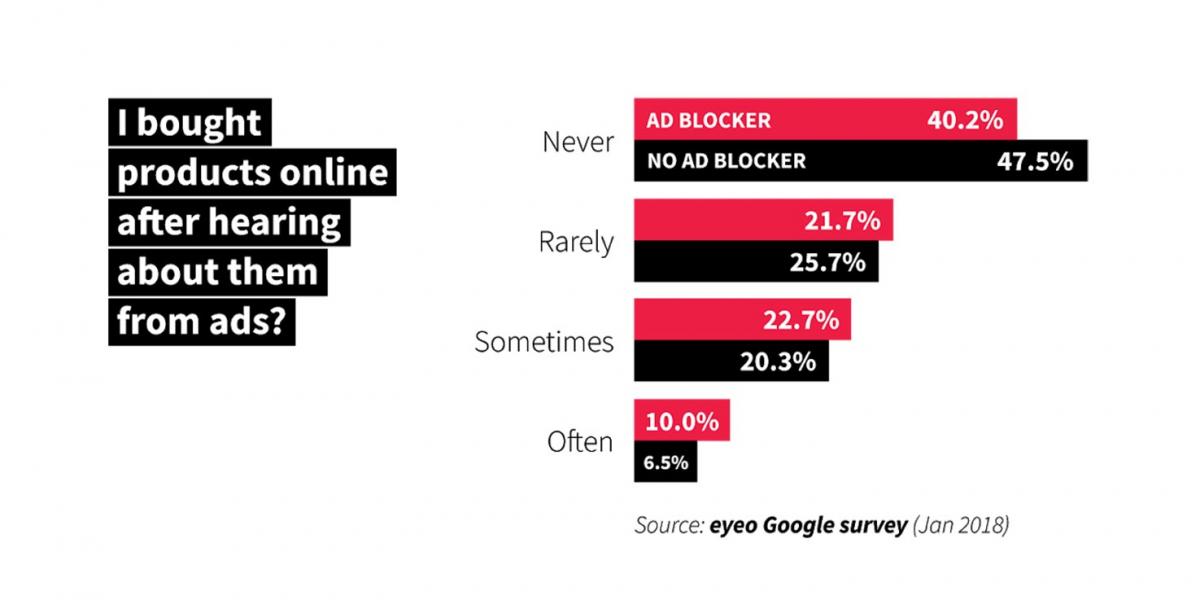 Established thinking tells us that ad-blockers are evil, and they destroy revenue for websites and businesses. Evidence suggests exactly the opposite..

It appears that this “evil” ad-blocking audience is likely to…

With this in mind, the smart question should not be “How do I circumvent or annoy ad-blocking users?” but “How do I reach this incredibly valuable audience in a positive and meaningful way?”

The good news is that there are already solutions in place to reach this audience and increase your market share. Several companies offer this access through established integration with publishers such as Criteo, Taboola, Outbrain, Stroeer SSP and Media.net.

The better news is that these solutions are officially licensed by the major ad-blocking extensions, and follow the criteria for Acceptable Ads. These acceptable ad formats are accepted by the majority of ad-blocking users, and they are determined by an independent, cross-industry committee. By using these solutions, you can still reach your targeted audience, even if they use ad blockers.

More information about Acceptable Ads can be found here.